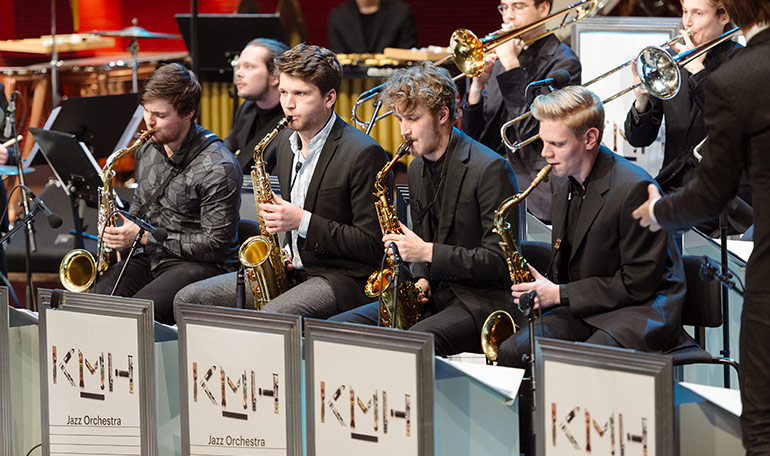 is a big band which regularly works under the direction of Patrik Skogh or guest composers, organizers and band leaders.

KMH Jazz Orchestra usually makes four productions a year, with compositions and arrangements by guest musicians and KMH's own students. In recent years the orchestra has made productions together with, among others, Monica Dominique, Ann-Sofi Söderkvist and Cecilia Persson.

The present artistic director of the KMH Jazz Orchestra is trumpeter and band leader Patrik Skogh, also a lecturer in trumpet at KMH.

KMH Jazz Orchestra was founded in 1975 by Bengt-Arne Wallin, who was also elected as a member of KMH's honorary collegium.

During the summer of 1975, Bengt-Arne traveled around at various universities in the United States together with Clark Terry on a clinic tour. He then discovered that at most universities there were permanent, scheduled broadband that sounded very good.

He then got the idea to launch a big-band project at the newly launched KMH jazz programme. It was a logical thing to do, because the compositions and orchestrations now created by the students, via the big band, could be directly integrated into the teaching. However, there were some problems in the beginning.

It took several years of idealistic work: purchase of repertoire, finding rehearsal rooms, and private crinkling for permission to use one piano or another. The big band was not allowed to use the school's pianos for so-called classical education, "jazz" was supposed to be played on the so-called everyday pianos. Moreover, a private dragging of sheet music bags, configuration of sound systems, set-up of music stands, etc. was necessary to make it possible for students to participate in big band projects, constantly veering between all scheduled regular activities.

Bengt-Arne toiled hard to make KMH Jazz Orchestra accepted at KMH and it was not until 1982 that the big band was scheduled as part of the regular curriculum. He tore even hard for the band to get attention outside KMH. As Bengt-Arne himself recalls:

– I was offered the job as musical manager and bandleader for a weekend series of televised concerts in Kungsträdgården (the Royal Garden) in July, 1987.
I then handpicked 75% of the orchestra from the students at KMH and completed it with professionals from the industry. It became a wrestling band.

Bengt Arne led the band until 1991 when Örjan Fahlström took over. Örjan is a famous arranger and composer, but he has had a policy of primarily engaging other arrangers for the KMH big band productions.

Örjan has created an educational method to teach students interaction and intonation and also brought Bengt-Arne's tradition further, allowing students to use the KMH Jazz Orchestra as a forum to perform their own creations. The KMH Jazz Orchestra went on a highly acclaimed tour in 2004, where all the material was composed of students from KMH.

The big band goes on a tour a year and has visited i.e. Los Angeles, Finland and Denmark. The band has also played at many jazz clubs around Sweden, among others Nefertiti in Gothenburg, Fasching in Stockholm, Crescendo in Norrköping and Village in Västerås.

The present artistic director of the KMH Jazz Orchestra is trumpeter and band leader Patrik Skogh, also a lecturer in trumpet at KMH.