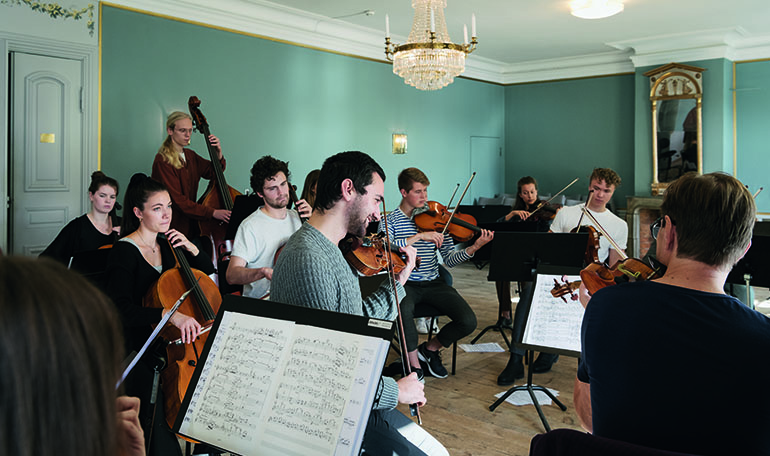 In an inspiring environment at Edsberg Castle nearby Stockholm, you are given ample space to develop your instrumental technique, through individual training and practice in chamber orchestras. An excellent team of professors oversee your development in piano, violin, viola or violincell.

The Bachelor's Programme in Classical Music gives you a solid foundation for acting as a professional musician in the national and international music community. In classical music at KMH you can choose between studying the following:

If you choose to immerse yourself in solo play or orchestral play at Edsberg, you become part of KMH's long tradition of music education with emphasis on chamber music at Edsberg Castle.

Teaching at Edsberg Castle is conducted at the highest international level with educators who themselves are active musicians and the prime ones in their field.

Please note that a knowledge of Swedish is a general entry requirement for first cycle studies at KMH, but exemptions can be made.

The program is an education in classical music, where you through thematic studies gain an in-depth understanding of the cultural context from which the music has emerged.

Chamber music is a major and equally important part of the program as the individual instrumental teaching. All students participate in joint chamber orchestra productions and the string students together form Edsberg's Chamber Orchestra.

In addition, courses in music history and music theory are included, as well as optional courses that may involve deepening or broadening your skills within the framework of KMH's courses.

The three-year program ends with an independent work of 15 credits where the knowledge and skills you received in the education are put to the test in an own artistic project consisting of a sounding and a written part.

A common seminar series called Edsbergsforum are theme-based studies and integrated topics, such as music theory and instrumental education. This setup gives you a complete understanding of the studies and a deeper insight into the connection between music and performance.

Many of the students who studied classical music on campus Edsberg at KMH are currently active in various orchestras but also successful soloists. The majority have won prizes and received awards for their music and performance.