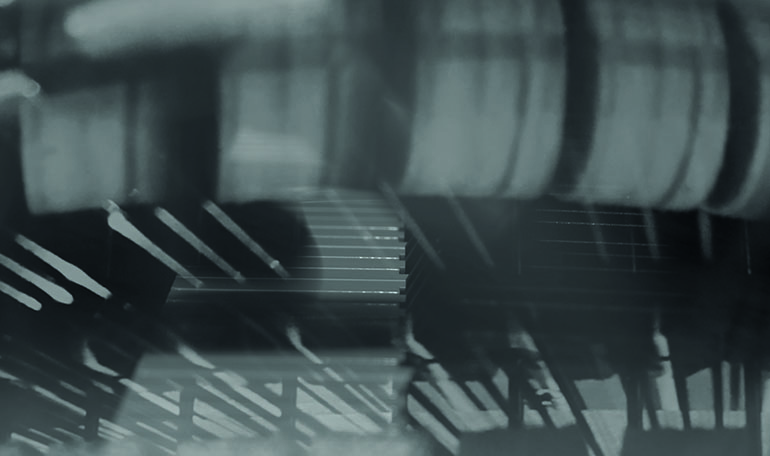 With Music as a Script

The purpose of this study is to interpret and visualize art musical form and content with the help of moving image. The moving imagery focuses on the playing musician and the gestures that arise when the music is played.

The study is conducted on the basis of the following research questions:

Studies show that the picture tends to dominate when music is combined with moving image. One of the reasons for this is that the visual mind accounts for 80% of the impressions the brain processes. The result is that the recipient's attention to the musical process deteriorates or is disturbed, thus reducing the musical intrinsic value. The method of avoiding this is to create an imagery that has the task of lifting and highlighting musical form and content.

With the help of small cameras this is investigated in practice. In the movie below, twelve cameras were used simultaneously when the music was played. The moving image layers (films) are then placed on top of each other with different opacity and then interpreted as an figurative interpretation with the music as a model to create pictorial similarities with musical form, musical events, parameters, textures and sound reliefs.

The purpose of this project is to show parts of these films and to report experiences from this ongoing project focusing on questions about how a moving imagery can be designed for the viewer/listener to see and hear intermodally. An excerpt from one of the films can be seen below (from Debussy: Reflects dance lèau, Johan Fröst, piano).

By extension, the problem formulations are also based on the new intermedial aspects that arise when the music and, the film intended for the music, interact with each other.

To alleviate this problem, one of the completed films has been used as a model for composing an electroacoustic track. The new electro-acoustic music is then correlated with the original piano music. The resulting fusion gives indications of the power of the visual representation of the musical form in the original music. Also an excerpt from this electroacoustic composition, which used the film as a model, follows. The excerpt is from Image Scheme by Henrik Frisk from 2019.